Thai Society for the Prevention of Cruelty to Animals (TSPCA) in cooperation with the Lawyers Council of Thailand has organized a kick-off party to introduce the newly drafted Animal Welfare Legislation to the key stakeholders and partners on 18 August 2006 at the Dusit Thani Hotel, Bangkok, prior to passing it into Thailand’s law-making process.

This meeting also open forum for all participants to share their ideas and recommendation on the bill which are very constructive for further improved developments. In his opening speech to the gathering, Vice Minister of Agriculture and Cooperatives Doctor Charal expressed his welcome to join force with TSPCA to submit the Bill to the Parliament to strengthen a unified effort for the development of animal welfare in Thailand with support by all parties concerned.

The session was also briefed on law-making process by Deputy Secretary-General of the Parliament Khun Boonrueng Burapakdi that the bill is eventually introduced to the Parliament and how it can be passed through the law-making process and become effective. The Parliament’s Deputy Secretary-General encouraged TSPCA either to join hands with Ministry involved or to directly submit the bill to the House President with at least 50,000 signatures in support of the Bill.

To honor members of TSPCA’s Drafting Sub-Committee and Scrutiny Committee of the Lawyers Council of Thailand who contributed to the success in drafting the animal welfare bill, TSPCA has presented Certificates of Appreciation to them. by Khun Boonreung Burapakdi, the House’s Deputy Secretary-General.

It is good to note that the highlight of this meeting is that Associate Professor Vet. Parntep Ratanakorn, Dean of the Faculty of Veterinary Science Mahidol University and Vice President of Thai Society for the Prevention of Cruelty to Animals (TSPCA) is seen receiving a copy of the newly drafted Animal Welfare Legislation from Khun Chamnonk Thana (left), the Scrutiny Committee of the Lawyers Council of Thailand at the Bill Kick-off Party. 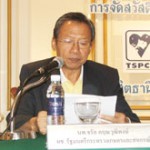 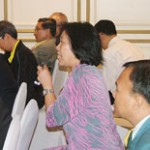 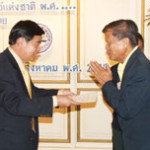 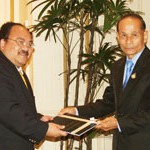