Question: Were there several drafts of Animal Welfare legislation? If so, which one was better?

Answer: The National Legislative Assembly (NLA) only considered the Animal Welfare Bill drafted by the Department of Livestock Development, and did not accept any draft bills from any other groups. The NLA created a sub-committee composed of its members, qualified scholars as well as representatives from NGOs, non-profits and other civil groups to deliberate and improve the Animal Welfare Bill as drafted by the Department of Livestock Development. On Wednesday, 12 November, 2014 the NLA voted 188 – 1 in favour of passing the Animal Welfare Act, and later that day Prime Minister Prayut Chan-o-cha signed the bill into law.

Question: What was the “People’s Draft”?

Answer: In the past, there was one such bill that the House of Representatives accepted to be considered for further deliberation. This bill was submitted by TSPCA Director Mr. Sawan Sangbunlang during the Yingluck government. In the past, there may have been other draft bills submitted by other civic groups but they were not taken into consideration by the past parliaments because many of the petitioner’s signatures did not pass verification.

Answer: No, the current law does not define cruelty in 20 points. However the house sub-committee did make changes to the Department of Livestock Development’s draft, in order to enlarge the scope of the bill. Their changes lengthened the reach of the draft bill, and allows for greater punishment of offenders. The current Animal Welfare Act tells us how to enforce the law. The aforementioned 20 points were not transferred piecemeal into the current act, but the subcommittee did take them into account and adapted the draft bill of the Department of Livestock Development to include the essence of most of these points. In fact, the subcommittee actually expanded the scope of the draft bill to include more than these 20 points.

Question: So, if the Animal Welfare Act does not have these 20 points, will it be effective?

If we had transferred the 20 points in their entirety into the draft Animal Welfare Bill there would likely be problems, as the 20 points would conflict with the existing measures in the law, and some of the 20 points are already in the law. This would be akin to putting a Toyota engine in a Ford car. The correct way to solve this problem was to take the essence of the 20 points and combine them with the draft Animal Welfare Bill.
If you were to put all of the 20 points into the draft Animal Welfare Bill, and did not follow a sensible and clear methodology, future governments would likely amend the law, or if it was highly contradictory, future governments may simply abrogate it. Officials would possibly not be able to enforce the law, due to inconsistencies in within the law’s decrees. There may be groups of people who would try to oppose the law due to perceived flaws in logic within the law’s edicts. The contradictory nature of the law would likely enable some to use it as a tool for harassment, or unscrupulous officials could use the law for illegal purposes. For example; it is true that we cannot boil cats, but according to the 20 points it is also illegal to boil live crabs, fish and shrimp. Hitting a crab, fish or shrimp before you consume it will be illegal. If you use a riding crop to discipline a horse during the Olympic Games, this would be illegal, according to the 20 points.

Question: What should animal lovers do to help?

Answer: Please show support for this law by informing everyone you can about the law’s existence. Help us inform the public about what they can and – most importantly – cannot do to animals. The legislators have finished their work. They voted on the bill and ratified it into law. But our task has only just begun. We need to be vigilant. We need to report incidents of animal cruelty to the relevant authorities, and educate the public and allow them to form their own opinions and give reasonable feedback. In the wake of the passage of the Animal Welfare Act, there will soon be a council organized to ensure the enforcement of this law, as well as adjudicate incidences of cruelty and include additional acts of cruelty into this law. We need to support this council by informing the proper authorities and officials about the existence of this law, so they will be able to enforce it. 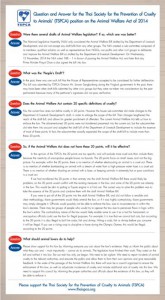