The Movement of the Animal Welfare Bill July 28, 2014 Mr. Chaichan Laohasiripanya (Third from left) Secretary-General of Thai Society for the Prevention of Cruelty to Animals (TSPCA) submitted the letter to General Paiboon Koomchaya (The Junta Chief of Justice Affairs of the National Council for Peace and Order) through Mr. Satid Suthiserm (Second from right) the lawyer of the Office of the Permanent Secretary, the Prime Minister’s Office for the purpose of requiring his support in driving the Animal Welfare Bill to be deliberated by the National Legislative Assembly August 1, 6, 2014 Mr. Chaichan Laohasiripanya also submitted the similar-content letter to Mr. Charae Panpruang (Secretary General of the House of Representatives) and to Ms. Norarat Pimsen (Secretary of the Senate) respectively August 5, 2014 Spokesperson of the military junta Ms. Patamaporn Rattanadilok Na Phuket said after the meeting of NCPO no. 9/2557 that the Animal Welfare Bill is one of the total 38 Bills which were considered by NCPO and waiting for the deliberation by the National Legislative Assembly. 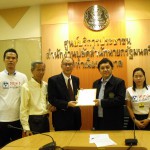